In the 14th General Elections of Malaysia on 9 May 2018, the Pakatan Harapan coalition won the majority number of parliamentary seats to form a new government. It marks the end of Barisan Nasional’s 61 years rule and first change of government in Malaysia.

Pledges were made in Pakatan Harapans’ election manifesto and it has been more than three months since the new government was formed. 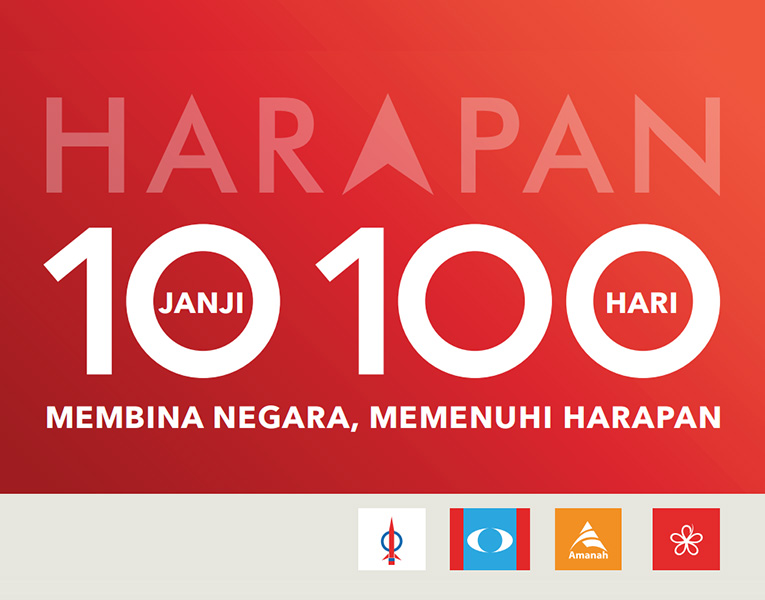 Entrepreneur Insight looks at the progress of Pakatan Harapan’s “10 pledges in 100 days” manifesto.

The GST was zero-rated effective from 1 June 2018, but parliamentary approval is needed to formally dismantle the unpopular 6 per cent consumption tax and bring back the Sales and Services Tax (SST).

The government’s plan is to implement the SST beginning

2. Stabilise the price of petrol subsidies

On early June, Finance Minister Lim Guan Eng said the federal government has allocated RM3 billion to subsidise fuel prices for 2018, while maintaining the retail price of RON95 and diesel for the rest of the year.

3. Eliminate unnecessary debts that were forced

The government has yet to finalise the mechanism which will enable housewives to be given a two per cent contribution of their husbands’ monthly Employees Provident Fund (EPF) contribution.

Deputy Prime Minister Datuk Seri Dr Wan Azizah Wan Ismail said that there were several technical matters to consider including laws related to the fund before the Pakatan Harapan pledge could take off.

According to a news report, the minimum wage in the country is expected to be increased within the next couple of months and will be implemented and standardised across the board for all Malaysians and foreign citizens.

Human Resources Minister M. Kulasegaran said this was following the completion of the review on the 2016 Minimum Wages Order by the National Wages Consultative Council (NWCC).

He also explained that the minimum wage would be reviewed every two years, before finally peaking at the RM1,500 rate as promised by the end of Pakatan Harapan’s current term as government.

6. Restore Sabah and Sarawak’s autonomous rights, as enshrined in the Malaysia Agreement 1963 (MA63)

De facto Law Minister Datuk Liew Vui Keong revealed that the cabinet has agreed to the formation of a special cabinet committee on the Malaysia Agreement 1963.

He said the committee will study and propose corrective

measures in relation to the following matters:

The National Higher Education Fund Corporation (PTPTN) has permitted borrowers with salaries below RM4,000 a month to defer repaying their study loans, by going through a registration process.

The government also repealed PTPTN’s blacklisting policy, where all PTPTN loan defaulters has been removed from the immigration blacklist. Blacklisted individuals are not allowed to renew their passports and are barred from leaving the country.

8. Set up a Royal Commissions of Inquiry into scandal ridden institutions

The Commissions will also be tasked to recommend appropriate follow-up actions, as well as detailed mechanisms to resolve these mega scandals, and to reorganise the institutions’ leadership structure.

9. To introduce a National Healthcare Plan

The Pakatan Harapan government will introduce Skim Peduli Sihat, similar to what was implemented in Selangor, to the rest of the country.

The healthcare scheme provides RM500 per year for B40 families to visit private clinics for basic treatment (primary care). This will ensure they do not depend only to government hospitals or public health centres that may be far from their homes. It also reduces the workload of government health officers.

The government is still in the stage of planning this national healthcare concept.

Under the Pakatan Harapan Government, the Ministry of Finance has been instructed to review all giant infrastructure projects with foreign countries.

The government will also review the practice of government procurement and tendering system, as well as the processes to issue public-private partnership contracts by the Public- Private Partnership Unit (UKAS). The aim is to make sure that the criteria for bidding is transparent and consistent.

It has been reported that Transport Minister Anthony Loke said the second phase of Klang Valley Double Track (KVDT) rail upgrade project will not be carried out for now.